It was the year 2004 when the sportswear giant Adidas launched its iconic ‘Impossible is Nothing’ campaign. The campaign ran for a year and was Adidas’ most ambitious brand advertising exercise in six years.

The ‘Impossible is Nothing’ campaign featured 22 professional athletes from around the world, with Sachin Tendulkar being the face of the campaign in India. The campaign ran in 50+ countries and set back Adidas a humongous 40 million euros.

The collaboration between Adidas and Muhammad Ali was at the forefront of that campaign. Adidas embraced one of the champions from the past and turned his message into a philosophy. The campaign was just as awe-inspiring as it was memorable.

With this relaunch, Adidas intends to capture the same love and enthusiasm that they received when the campaign was first unveiled.

What will this Campaign be About 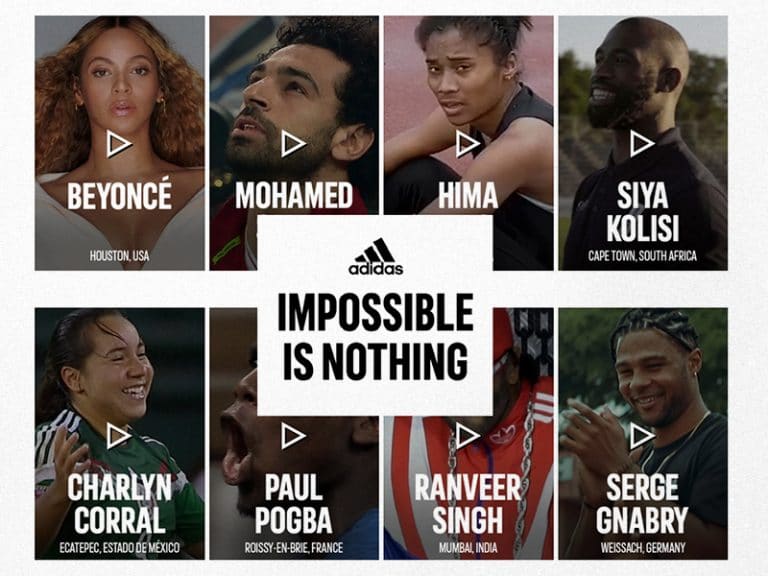 Adidas intends to release 20 films featuring high profile celebrities like Ranveer Singh, Beyonce, Paul Pogba, Hima Das, Mon Salah and Siya Kolisi. The films will showcase rare, home footage revolving around sports and culture of the world. The powerful narration of the stories is supposed to drive home the impact of the authentic stories.

Adidas thinks that this campaign is perfectly suited for the current times when the world around us feels so grim and dark. The Impossible is Nothing brand attitude urges people to look for possibilities and have an optimistic outlook towards the future of our people and planet.

Here’s what Brian Grevy Executive Board Member, Global Brands, Adidas has to say: ‘Impossible is Nothing is more than a campaign – it’s our attitude. Seeing possibilities with optimism is key to achieving our purpose of changing lives through the power of sport. This attitude is what inspires us every day and is pushing us to build the future. Seeing possibilities is for everyone who wants to create a better tomorrow for all people.’

Looking At The Big Picture

Adidas has been incorporating purposes and causes in its communication channels in the last twelve months.

According to Adidas, their brand’s advertising strategies are focusing on their customers’ causes and issues.

All this is apparent when you look at the efforts Adidas is taking towards creating a gender-neutral future for sports. Their mission to make their sports apparel, primarily shoes and clothing, out of 100% recycled polyester by 2024 is also a by-product of this attitude.

Channelling the ‘Impossible is Nothing’ philosophy, Adidas announced the plans it would take towards improving the future of sports. Adidas hopes to reach its goals by focusing on sustainability, credibility and inclusivity.