It’s frustrating to stand in long queues to get food. Even more, when you have to battle through the crowd to peek into the menu card. This frustration, however, birthed the giant food delivery conglomerate, when two techies from Bain & Company Delhi struck on the idea of inventing a platform serving the menu items of various restaurants.

Deepinder Goyal and Pankaj Chaddah started by scanning all the menu items of the restaurant and listed them on their intranet website Foodiebay.com. The website saw a huge surge of traffic and decided to launch its website open to the public. The name was later changed to ZOMATO – something with more of a punch and easier to remember.

Zomato today, is one of the highest-grossing companies in the food industry with over 100 million users. The passion and drift of the two techies led to the company’s overwhelming success, coupled with the brand’s robust marketing strategy.

Zomato’s SEO team has the most amazing strategy, giving the company high numbers every month. Zomato has listed all restaurants in India on its website, having millions of pages on its website. These pages provide information on directions, menus, photos, and reviews. Restaurant owners can also create and manage their restaurant page on the website. This gives them ample room to rank higher on search results.

Zomato targets popular keywords like “Order online” and “Restaurants near me” to acquire new customers. The team has created an internal linking structure in the footer of the website. When a user clicks on these links, the website detects their location and displays a list of restaurants near them.

It never felt to be a one-way communication. It’s direct, bold, and human in all respect. The core team comes up with engaging but unconventional ways to communicate with their audience, and that works great. The conversations revolve around food, and eating food, and smelling food, and so on. Well, food and movies are 2 elements one can strike a conversation on, with the random stranger, even in the metro. Clearly, the brand’s witty statements fuel their business that revolves around food.

just hoping that everyone reading this tweet finds someone who hugs them the way this pav hugs the vada🤗 pic.twitter.com/zkJ1EheLGN

Tuning with the trends

Whether it was Rahul Dravid’s transformation to a gunda, or Amazon Prime’s Last Seen Laughing campaign, Zomato was never late to the club. By tuning into the trends and happenings around the world, the Company entertained and engaged their fans with a little spice of their own.

(and a lil bit about how India ordered this year) pic.twitter.com/84xXSPB5Hh

The young team of creative intellectuals leaves no occasion, even a day to send captivating emails to their subscriber list. The fun part – they are not just about food but everything around it. 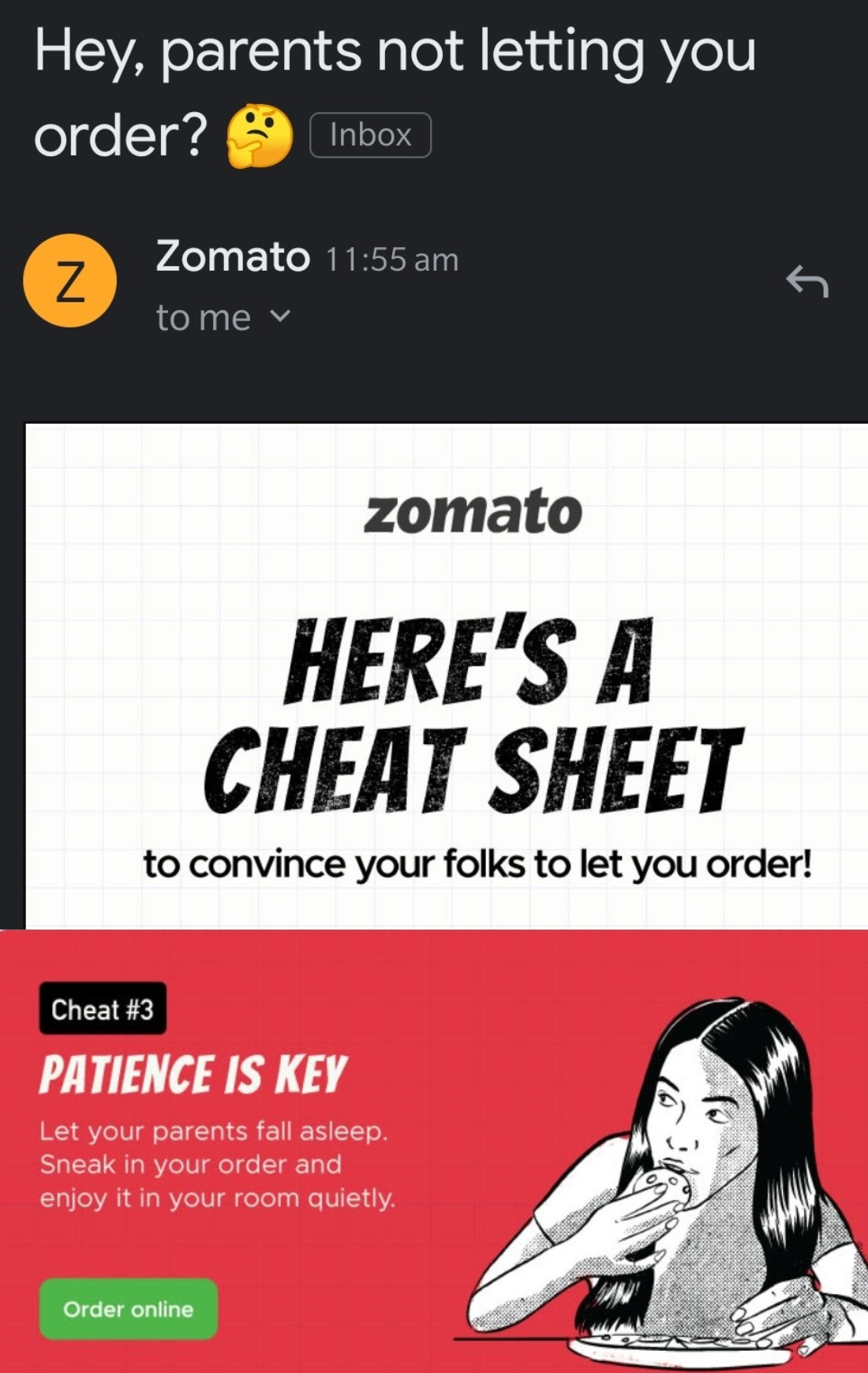 An amazing quality about Zomato – they never leave their fans bored. Their daily cuisines on social pages range from taking inspiration from popular fiction to contesting a random quiz, to going crazy over ‘chai’, and anything on food.

it is what it is pic.twitter.com/B8qyiY6nE5

Okay! That’s a lot of chai. Care for some snacks?

Reaching out during the crisis

Covid 19 came as a destructive force on the face of the earth. When some lost their lives, family, and loved ones, others got laid off and became penny less overnight. Zomato reached out to the people in need and provided them with the utmost care and necessities. The food delivery giant had set up a fund to provide relief to the families of daily wage earners, who are unable to generate any income. 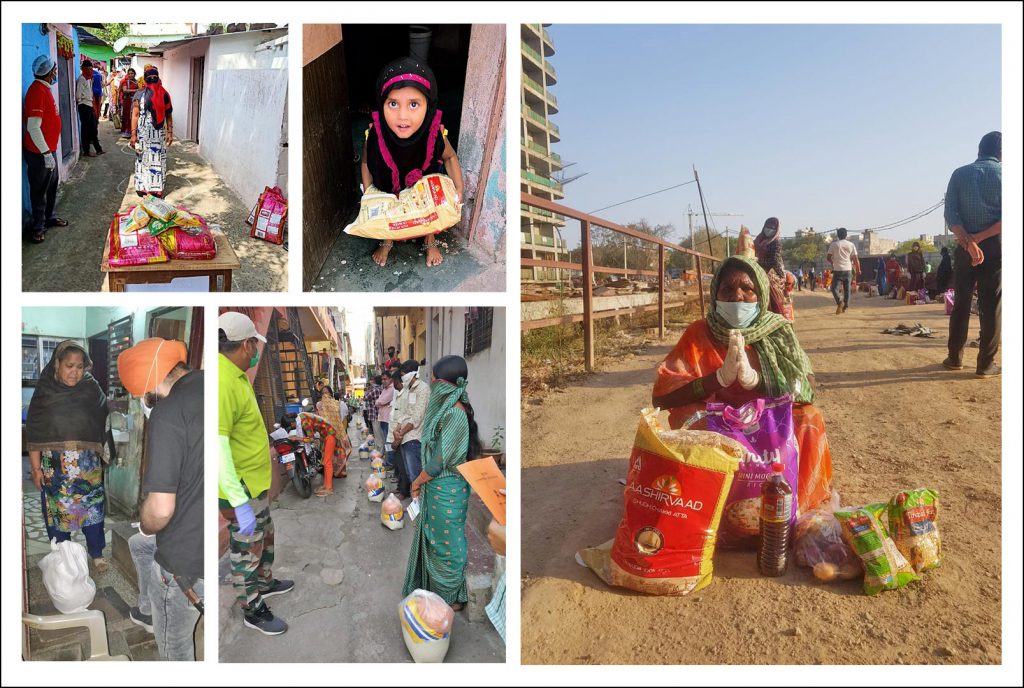 People who are part of their food delivery network also received support from the company through a fund that would cover any income they lost out of the crisis. The company also partnered with local stores to deliver daily essentials to households, and ensure that people will not have to step out of their house. Cash on delivery was discontinued for a certain period to ensure a contactless delivery. Let’s gather around to look at the best campaigns Zomato has delivered to us that made our hearts glow – bright and red.

It’s quite hard to imagine a food delivery guy encouraging people to eat home-cooked food, but when Zomato did spread the word it became exciting. Brands were not shy to join the conversation and came up with their own statements.

The Company involved its delivery partners in a fun ride to showcase their hidden talents, with the best ones featured by the Company.

Here's something that will make your day – some of our delivery partners showcasing their talents. 🎤🎼 #RideToFame pic.twitter.com/GOAfw2H6rO

She always knows exactly what you love to eat. It’s #MothersDay tomorrow and you can gift her a Sunday special treat – just #OrderForMom on Zomato 👩‍👧‍👦 pic.twitter.com/h5n6hUst3x

Cricket and food can go well together – is perfectly displayed by Zomato. With successful creatives and linking both from time to time, Zomato has nurtured the Zomato Premier League that the fans love. 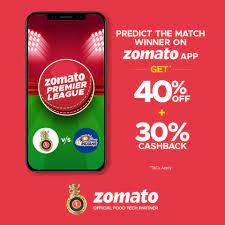 As much as we love food, we love the witty and quirky statements, campaigns, emails, and everything Zomato has for us. They never get tired and we never get bored to hook up to their social pages.