Balenciaga took to the latest Paris Fashion Week to debut the new Balenciaga Simpsons episode. Following the episodes debut they also released a new fashion line for the Spring-Summer collection following this collaboration. And the inspiration for this fashion line was taken from the Simpson’s episode.

The film-premier styled red-carpet event was made to invite the change of returning to physical runways again. And, this cartoon was only a small part of Balenciaga’s red-carpet show. The fashion week crowd at Théâtre du Châtelet on October 2nd 2021 were preceded by an experience of Balenciaga’s showcasing its Summer Spring Collection which featured models Naomi Campbell and Amber Valletta; also, Cardi B. In the last 10 minutes, the new Simpsons episode was broadcasted.

The Balenciaga Simpsons episode can now be seen on Balenciaga’s YouTube channel was the episode where Homer tries to make Marge’s dream come true.

On Marge’s birthday for which Homer has been looking forward to since the onset of New Year’s; he notices her affinity to Balenciaga. This is when he unrolls the magazine and notices the pamphlet for Balenciaga which had been resting in her hand while she was sleeping. 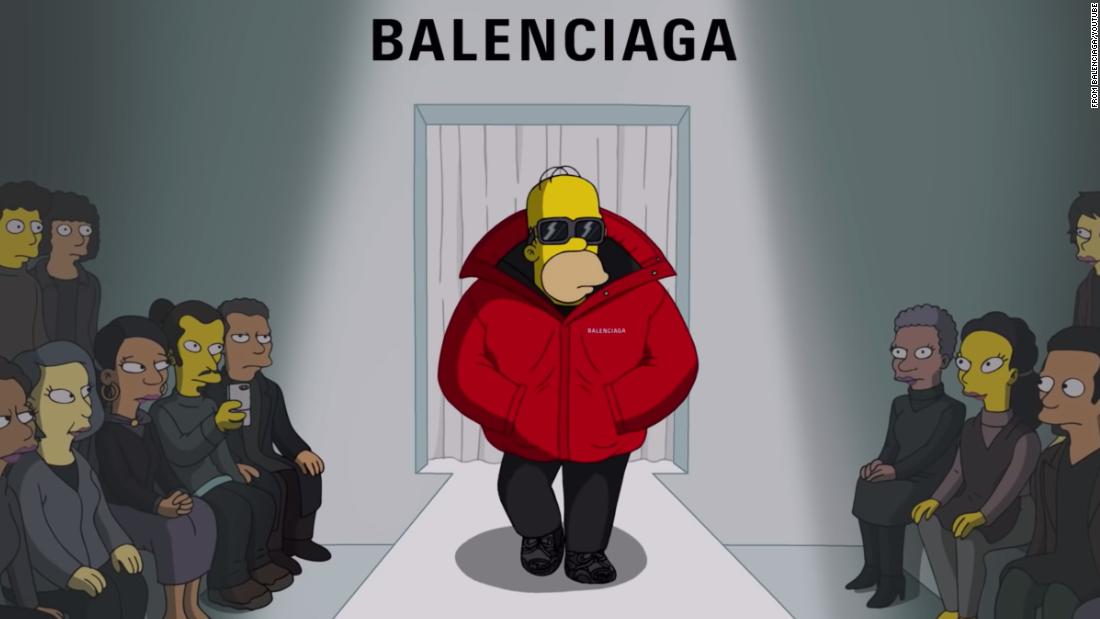 Frantic to make her dream come true, he writes an email to Balenciaga. His email professes his wife’s love for their brand and knowing his social status appeals if they could send him anything. His email written to Balenciaga is met with distaste over his non-prosperous appeal and instead is returned with a beautiful dress.

Marge falls in love with the said dress and takes the day off to wear it. Homer, all the while tries to protect the dress from calamities; aware that neither of them would be able to pay for the dress; let alone for the damage done to it for return. The dress is returned back to Balenciaga with a mournful letter from Marge.

This letter strikes a chord at the headquarters of Balenciaga and Gvasalia apparently; decides to help them. As they soar the skies, new outfits are designed and made. Gvasalia offers to fly the residents of Springfield out to Paris. He fails to get the offer across to them and thus, instead gives them a bait of KFC instead to come visit Paris.

Demna Gvasalia; who has been featured in this Simpsons’ episode; has proclaimed his love for Simpsons, adding to the praise Simpsons’ satire.

Surely the episode must have been received well at Balenciaga’s since several outfits featured on the Simpsons’ episode have been set to release.

Out of everything that happened on the episode, Balenciaga released merchandise that took inspiration from Demna Gvasalia’s associate, the designer on the plane with the checked outfit, the black sneakers, Kim and Kanye, Justin Bieber, Anna Wintour and almost all of Springfield’s residents who modelled on runway.