In August of 2020, Olay had introduced a campaign focused on bridging the gap between women and men in STEM. They made a campaign that focused on the inherent sexism in STEM fields that presumably don’t employ enough women in those areas.

It should be duly noted that the following paragraphs have been written with a focus on one individual take on OLAY’s campaign and isn’t backed by research but rather personal experiences of one’s background during their course of learning in the area of one STEM field. Any logic narrated further to understand and deconstruct OLAY’s strategy is also always prone to the some amount of blunder; akin to that of OLAY’s.

Coding aspect of the campaign

From the looks of it, they have picked up the language of Python in the print advertisement. Unsurprisingly so, as Python is known for its simplicity and relatability to the English language in comparison to other high-level programming languages like JAVA or C. 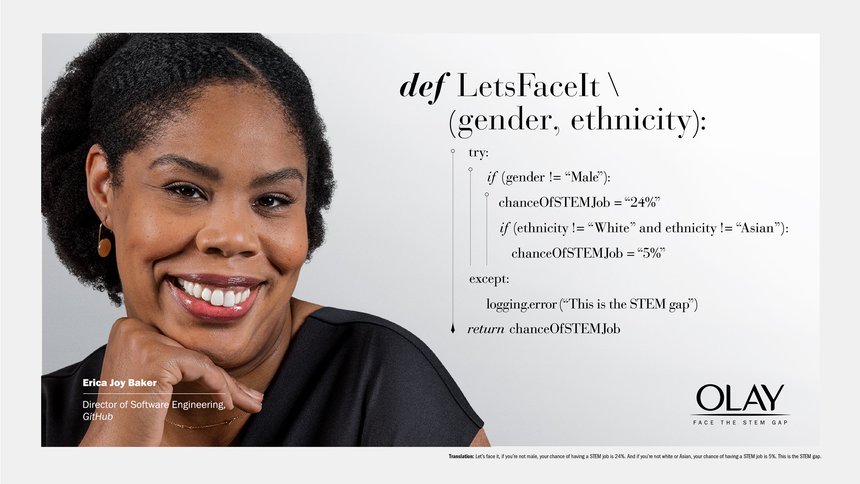 With minor experience in coding, some details couldn’t be overlooked. For example, the lack of an ‘else’ part of the ‘if-else’ code; which isn’t necessary but important here; the logic errors, and the liberties taken in the ‘except’ part of the code block.

This might not make much sense to the population not privy to coding and programming but these small errors make a huge difference.

Deciphering the logic of the code

According to the logic of the code, if you aren’t a male; your chances of making it in a STEM job in the US is 24%. In the female category, if you aren’t White or Asian, then your chances reduce to 5%. This logic does not specify anywhere about those who are males but aren’t members of the White or Asian race; aka Black or Latin men, or even men in general. This is where an ‘else’ part of the code should have included which made things more simple to understand. By noticing the pattern of OLAY’s campaign, this campaign was supposedly only for women and thus this information might not have seemed very necessary for them to relay.

OLAY had surely expected that the logging.error in the ‘except’ block will catch such minor  this error, but the written format of the code is a bit lousy in its making. The same logic however does not take women of White or Asian races in consideration however; despite all of them being the female part of the population, and women who would or could be contributing in STEM fields.

According to OLAY’s logic to writing the program; they perhaps wanted the program to go in the except block in continuation after the execution of code in ‘try’ block; to show that Black and Latin demographic of women are at a disadvantage. But, according to Python’s rules; the code only jumps in the ‘except’ block when it reaches an error; more specifically if it reaches the specified error in ‘except’; if there is any, during runtime. So running a function with variable values of “Male” and “White” would give you a statement: “This is the STEM gap.”, which doesn’t make sense according to the anticipated logic.

This is more of a trivial error but worth pointing out in my opinion that string value; i.e those written in single quotes or double quotes in Python aren’t preferred to be written like that displayed in Olay’s print ad; as programs are not quite written to look like English. Another more trivial flaw includes using a special character in the function name other than the underscore symbol. Space isn’t allowed in function names as a part of Python’s rules.

The major logic error in this program also is that the ‘chanceOfSTEMJob’ hasn’t been assigned a primary value before the ‘try’ block. Without it, even if the function at the time of calling was given “Female” and “Black” or “Latin” as gender and ethnicity respectively; then it would only return an error.

Understandably, this code was meant to be more of a creative project that would be appreciated by the audience, but it seems like OLAY hadn’t thought it through in terms of what they wanted to deliver. 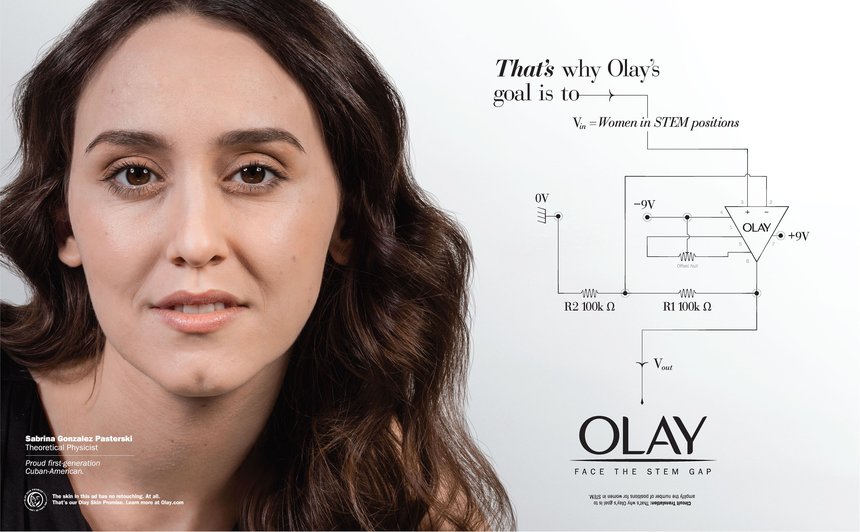 Usually, logic circuits that contain an op-amp (Operational Amplifier; which is denoted by the triangular shape in circuit diagrams) have the IC name written on them. The IC during its manufacture has its specifications drafted out, including what voltage values it needs to operate. Since the voltage values available are standard, resistors are used to give the pins of the IC the appropriate voltage value by using the logic of voltage-divider rule or something of the same kind. As OLAY has used its more creative side, the name of the IC has been replaced with the name OLAY. But even if creativity is allowed in an imaginary electronic circuit, there are still flaws to it.

Deciphering the logic of electronic circuit

From what seemed like a comparator op-amp; an op-amp that compares its two inputs; the inputs given to it don’t make much sense. In simple comparator logic, if the voltage at the positive input is higher than the voltage at negative input, the positive reference voltage given to the IC is allowed at the output end. Vice-versa if the negative input is higher. The inputs given here to this comparator are “Women in STEM field” and a voltage value. The “Women in STEM field” hasn’t been given a voltage value of its own, but even if it was; the answer would have been high or low; an answer which is a part of the set of binary values. The issue here is that the output binary values needed to have a creative answer of their own but have been left untouched, which can only be assumed as a voltage value. This brings up confusion about what the output value actually is; a voltage value or a creative answer.

The idea behind this campaign was good, but like the other one, hadn’t been quite thought through well.

Another point worth noting is that Erica Joy Baker is the Director of Software Engineering, GitHub but can be associated with coding. However, while no offence is meant to Sabrina Gonzales Pasterski who is a theoretical physicist; cannot be related to the Electronics branch of engineering in any way.

Molecular aspect of the campaign

Despite sounding like an unnaturally tough critic of this campaign, a lack of knowledge and hatred for Chemistry makes the eligibility of breaking down the 3rd part of the campaign even less than what has been unfairly claimed in the previous two print ads. Perhaps, the authenticity of the 3rd print ad will have to be done by someone else; preferably a woman who knows this area well. 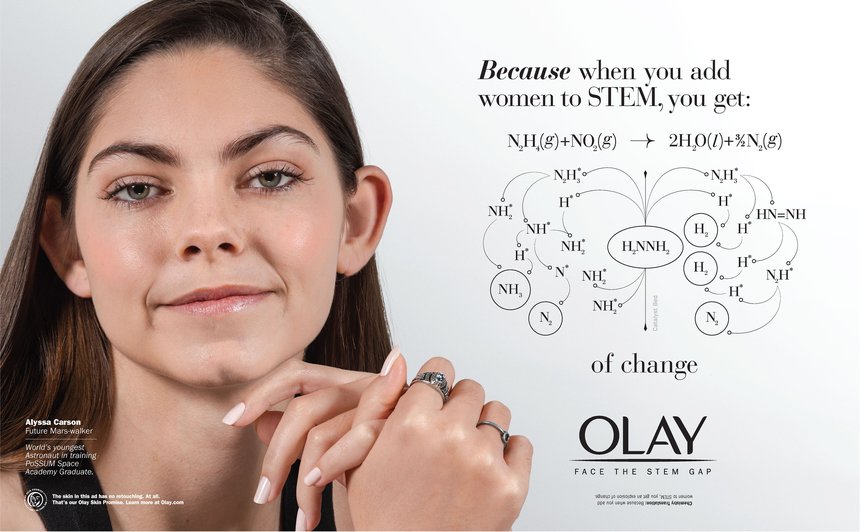 The discussion of not enough women being in STEM has been brought up a lot and many activists chalk it up to sexism and men not allowing women in the space. This subject has also been stretched for discussion because some people believe that sexism is arising from the fact that women are perceived to be less intelligent than men in this area and therefore not being taken for said jobs.

Drawing experience from personal life for once, rather than finding a research study; STEM subjects are quite tough to understand. But this toughness of the subjects; by the nature of observation; is felt equally by both men and women. It has more to do with the inherent intellectual capacity and grasping powers of a person; which relies more on genetics; than sex. It is the objective harshness of the subjects, or more appropriately, a personal preference that made anyone stray away from pursuing these.

To play the devil’s advocate to fierce warriors of social justice for once; the tendency to focus a lot on the inherent sexism in STEM seems to have forgotten about individual choice, something that the feminism movement has allowed women to have. Furthermore, why is the STEM field; supposed to be inherently masculine in its type by this faction; the only way to measure one’s intelligence. The Most Important Announcements From Google I/O 2021