Nintendo has now become a household name, thanks to their nerve-wracking game arcades. Nintendo remains focused on amplifying gaming experiences by keeping them fun and portable. Mario, Pokemon, and Zelda – the three most popular games of all time are all products of Nintendo that we cannot help but addict over. Curated from among the campaigns over the years, here we appreciate a few.

The Video game industry in America was in shambles and industry pros Atari and Mattel were dumped in losses. Video games were dead – until Nintendo ventured in. Alright, we cannot say yet that the industry revived because retailers were not interested to take NES nor listen to how Nintendo’s Famicom was doing well in Japan. Despite all odds the company geared up for a heavy battle only to get gain from half of the manufactured units sold – that was until Mario came into play. Nintendo convinced the gamers and parents that they had something different to offer (moving from the traditional marketing trade-offs), something like the Zapper light gun and Robot Operating Buddy. The first NES commercial captured the attention of the public.

Want to know about the Marketing of Mario? Click Here.

“Now You’re playing with power” – became the ultimate tagline for most game arcades. Even during the launch of the NES classic edition, the company brought back the original title evoking nostalgia among gamers.

While Nintendo was taking charge Sega hijacked public attention by targeting the “hipper” groups. Well, Nintendo couldn’t just sit back and launched a response attack that goes by ‘Play it Loud!’. The adverts spawning across 1994-1996, used youth slang as a way to connect to the core audience, the teenage boys.

Playing with humor and addiction, Nintendo kicked off an exciting advert back in 2004. The campaign centered around the addiction for “N”, an illicit drug (yes, N stands for Nintendo), and a homeless Nintendo fanboy with his game cart.

Man! Definitely not something that can be pulled off in today’s society, but back in 2004 this was a crazy move. While you’re forbidden to touch most things (because touching is not good) Nintendo encouraged the players to touch their games and have control over them. The campaign ran across various mediums like prints and adverts and even a website was created where users could order mannequins, send quirky pictures, and win exciting prizes. 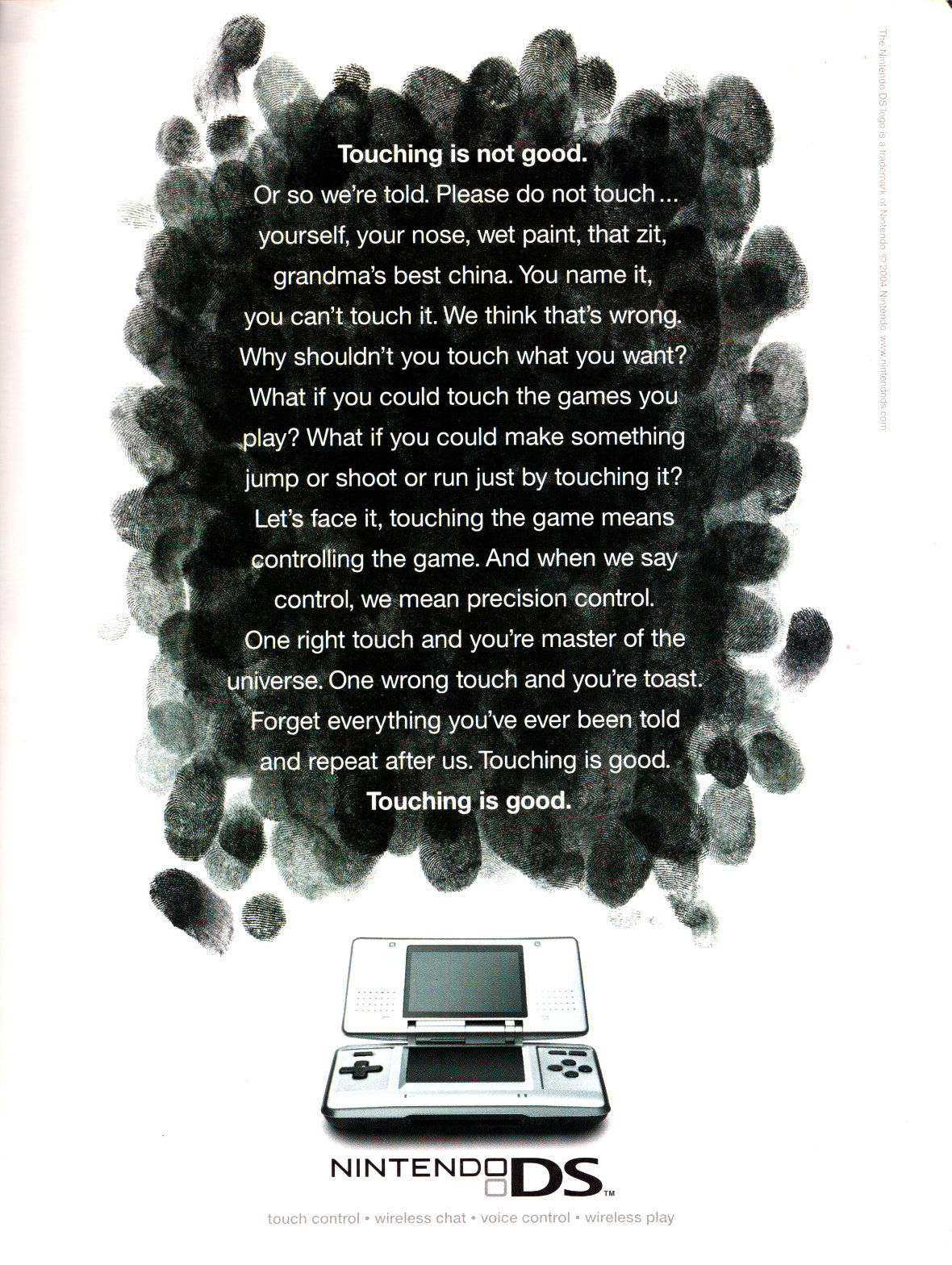 The adverts promoting Wii and Wii U were targeted to players of all ages, and not specifically to core gamers. Wii launched in 2006 was driven by the tagline ‘Wii would like to play” and an advert showing two Japanese men visiting families and having a game session was released. Something similar concerning family was released for the promotion of Wii U with the tagline “Wii U How you will play next”.

The Nintendo Switch definitely saw the best marketing lights of the day. The campaigns for the Switch were not very extraordinary but something that easily captivated the users. The special symbol of Nintendo Switch is a “click” which is similar to gamers snapping fingers – an idea that is very familiar to people’s life.

Various adverts showing real-world game experiences like gaming while in traffic, were used to hijack public attention. Not to mention viral marketing was used smartly. Game cartridges are said to be the bitterest components in the world and many players purchase them just to experience their taste. Nintendo Switch had non-toxic bitters making it less harmful for children in case they swallowed it. This novel news aroused sensation in social media which ultimately led to greater sales.

Nintendo has come a long way in producing amazing game arcades and impeccable marketing efforts. Which campaign did you like the most?